We’re proud to have contributed to the Tiki Love Truck, a prominent exhibit in a major new exhibition at the Victoria & Albert Museum, and one of the best-known creations of British artist Carrie Reichardt – whose work we wrote about recently.

Disobedient Objects opened on 26th July at the V&A, Cromwell Road, London SW7 and runs until1 February 2015. From Suffragette teapots to protest robots, this exhibition is the first to examine the powerful role of objects in movements for social change. It demonstrates how political activism drives a wealth of design ingenuity and collective creativity that defy standard definitions of art and design.

Carrie used our  adhere IRS 2125 Flexible Epoxy Adhesive to mount the ceramic tiles on the Nissan diesel pickup back in 2007. Your application may not be as eye-catching as her work, but if you have an assembly that requires tough bonds to withstand extreme vibration, flexing and high temperatures, IRS 2125 could be the answer. 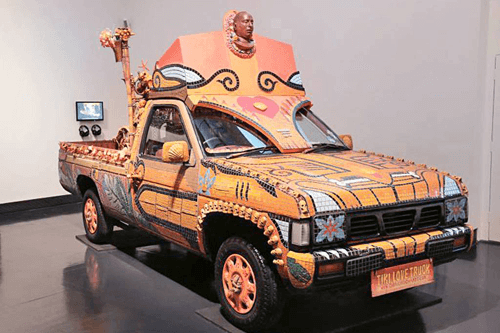