We get stuck into the Love Truck

The problem involved a painted steel substrate, hand placed glass/ceramic tiles, substrate flexing and widely varying vibration over extended periods in outdoor conditions – in short a Tiki Love Truck! An unusual project even for us, but nonetheless as it proved, well within the capabilities of the adhere IRS 2125 Flexible Epoxy Adhesive.

The project was an Art Car – defined by Michael Trainer, Curator of Art Cars 2007 as “A drivable installation – any vehicle which has been re-imagined, re-styled, re-modeled, or completely metamorphosed by an artist into a transport of delight.” In this case it was conceived by Baroness von Reichardt as a Tiki Love Truck based around the tiki symbology of a large carved talisman in humanoid form, common to Polynesian cultures of the Pacific Ocean. The Tiki Love Truck is a magical mosaic/ceramic adorned automobile, driven by two lovely hula girls who give out messages of love and peace as they drive by.

The base vehicle was a standard Nissan diesel pick-up truck to be covered in glass tile mosaics and ceramic Polynesian cultural images for the purpose of competing in art car parades – a major feature of the USA parade scene – but first revealed in the UK in Manchester 2007, where the Tiki Love Truck won the Makeover class alongside such vehicles as Crazy Golf – a VW Golf in grass effect with golfing participants, Bog Standard motorised bath tub, toilet and wash basin, Minnie 7 patchwork fabric covered Mini and Car Jack – a car removal robot wheeling away a Volvo like a wheelbarrow!

The Baroness googled “adhesives” and discussed the project with our technical advisors who suggested the adhere IRS 2125 Flexible Epoxy Adhesive – rapidly earning a reputation as a “stick-most-things-to-most-other-things” kind of adhesive in high performance specialist areas. It is a black epoxy resin system with a combination of flexibility and high adhesion strength on materials such as metal, glass, rubber and many plastics, including cable insulations and connector backshells at temperature up to 150°C. Originally developed for cable harnesses, fixing cables into connectors, IRS 2125 often solves problems where other adhesives are not suitable, offering relative flexibility and high strength adhesion for high technology bonding, sealing and insulating applications.

This suggestion proved to be a complete success over the 5 hours a day, 7 day installation and subsequently. Explains the Baroness, “As an artist I find the process of mosaic very therapeutic, hence the name of our organisation – the Treatment Rooms – and this adhesive certainly facilitated that process. It is just incredible – nice to use because you don’t have to mix it and with a convenient setting time. The tiles have been solid as a rock ever since. We have used the Love Truck for charity activities and will be taking it to Blackpool soon and then to Gateshead on New Years Eve.”

adhere IRS 2125 is flexible by epoxy standards, can seal to IP68 (continuous immersion) and it has a long shelf life (up to 18 months) and a pot life of 90 minutes at 23°C. Combined with excellent resistance to solvents such as de-icing fluid, petrol, oil and hydraulic fluid it really does what an adhesive should do – it produces tough bonds that withstand vibration and flexes sufficiently for many electronics, electrical and structural bonding applications.

This two-part system has a simple 1:1 mix ratio and is supplied in an easy to use side-by-side double syringe cartridge, complete with static mixing nozzles. 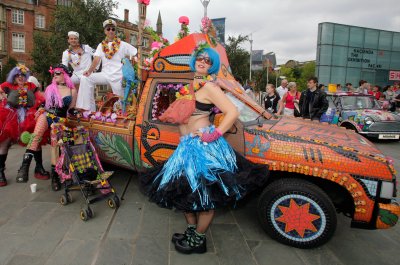