We stick urban art together

Modern art is such an integral part of life, the interweb and everything, that some exciting projects are taking place – perhaps where they always have – at the borders between the street and the gallery. So it is even more interesting to find this kind of project dependant upon an advanced flexible epoxy adhesive such as IRS 2125.

Our story begins with The Baroness working over the summer with the Single Homeless Project at their suburban art workshops, involved with young, homeless and vulnerable people. Together with other artists, the group produced a body of work that was exhibited at the Signal Gallery. The main piece produced by The Baroness was a VW bonnet in mosaicked ceramic with our IRS 2125. As The Baroness explains:

Since I have used this glue before I am entirely confident of its strength and flexibility which are important factors in large artworks that are moved around a lot. This piece was inspired by my time at the Urban Arts Project and used facial imagery from these workshops.

A Vauxhall bonnet was also mosaicked by the group as a co-operative exercise. At the end of the project and to celebrate the success of it, the SHP organized a one-day event called Artival after which the VW bonnet itself went on display at the new Mutate Britain Exhibition as part of their One Foot in the Grove presentation.

And so our story ends with a high performance 2 part epoxy adhesive – originally developed for cable harness assemblies, wiring, cable joints, terminations, electronics, structural bonding and downhole/oil well operations – now decorating one of London’s fast growing gallery venues. As a user footnote we return to The Baroness, who was delighted with the convenience and usability of IRS 2125

I had around 10 50gram cartridges which were easily applied with standard nozzles – workability and setting times were brilliant! 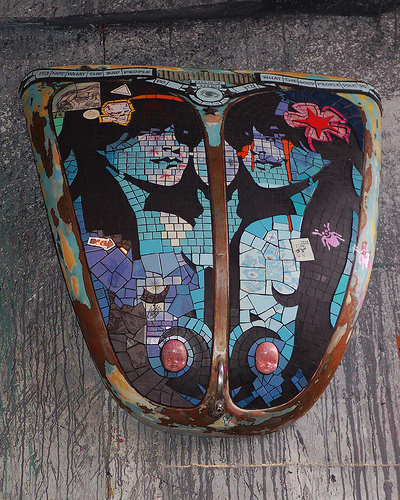