Very little is known about the diving behaviour of young sea lions who flourish on the Galapagos islands – which is where Araldite® 2012 comes in. Araldite 2012 was found to be the best adhesive to attach recorders and study repeated dives of sea lions down to 350–500 metres. The adhesive has to withstand the heavy impact of 100kg sea lions rolling, scratching, hitting rocks – not to mention the salt water of the Pacific ocean and the strong sun radiation.

A cooperation between the Galapagos Sea Lion Project, University of Bielefeld, Germany, the National Park Service of Galapagos and the Charles Darwin Research Station, Galapagos, is conducting the project and selected Araldite 2012 to attach time-depth-recorder (TDRs) to the sea lions to ensure that the recorders remained fixed whatever the conditions.

Preliminary results from the ongoing project showed that juvenile Galapagos sea lions dive up to a maximum of 350m, and adult sea lion females up to a maximum of 502m, which is an amazing record and makes the Galapagos sea lion the deepest diving sea lion species. And all of this new insight into sea lions has been made possible because the researchers were able to monitor what was happening with the use of Araldite 2012 and the recorders.

Araldite 2012 provided reliable deployment and retrieval of our dive recorders. Araldite 2012 ensured that our recorders did not fall off, whatever the depths and conditions, until we wanted to retrieve them which gave us the most wonderful data.

Araldite® 2012 is part of the Araldite® 2000 plus range. It is a fast cure, multi-purpose epoxy adhesive with extremely high toughness, combined with chemical and water/ humidity resistance making it an excellent choice for the sea lion project. Its novel use demanded the maximum performance in very unusual circumstances. It can be used in a wide variety of industrial applications where there is exposure to chemicals and water.

The success of Araldite 2012 in fixing the recorders to the sea lions provides answers about the natural history of the animals, including details such as where they dive and what they feed on which provides valuable implications for the management and conservation of the species. 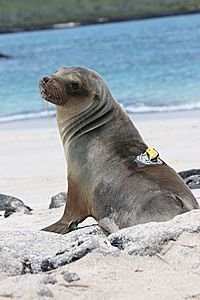