Baroness Carrie von Reichardt and her partner were asked by the Mutoid Waste Co to be involved in a show called Mutate Britain, where a number of well-known artists where each given pieces of a WW2 war plane and asked to let their creative juices flow. Explained the Baroness:

We were actually given two panels and had the only ceramic ones on show. One was called – Love the USA and the other was called Drop knickers, not bombs. One side was straightforward mosaic; the other side had tiles that had been covered in ceramic transfers and re-fired applied. These panels were drilled and hanged on display as part of this five storey show. Not a tile fell off. Rock solid thanks to your wonderful glue.

The adhesive so enthused over by the Baroness was provided us – we were able to fill the technical gap between ceramic tiles and WW2 aircraft panels so that resulting art pieces went together easily and were strong enough to be reliably displayed. Our application engineer suggested IRS 2125 Flexible Epoxy Adhesive with manual dispensing/mixing. IRS 2125 is a high performance black resin system. Its combination of flexibility and high adhesive strength lends itself to many high technology bonding, sealing and insulating applications. A two-part system with a simple 1:1 mix ratio, it is supplied in a convenient side-by-side double syringe cartridge, complete with static mixing nozzles generally used for cable harness assemblies, cable joints and terminations, heat-shrink sealing, electronics and structural bonding – it proved ideal. And not for the first time!

IRS 2125 is an excellent all-purpose adhesive, especially where long-term substrate flexibility is an important factor, giving high shear and peel strength with tough bonds that withstand vibration and flex. It has outstanding chemical and fluid resistance, including moisture, diesel and fuel oils, while being able to bond metal, glass, wood, rubber and many plastics. It will operate at temperatures of up to 150°C and can seal to IP68 for continuous immersion. It is also proven in downhole and oil well operations.

muTATE BRITAIN opened on 20th November 2008 in London’s largest non-corporate art space – a disused warehouse on Curtain Road, Shoreditch, where it provides an environment for emerging contemporary artists to showcase their material. 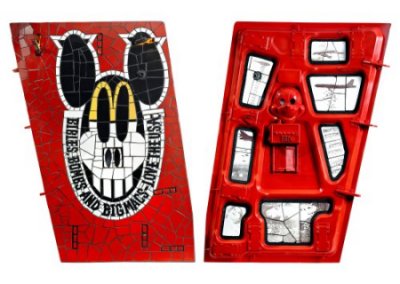