The engineers at optical instrument makers Gooch & Housego use a high specification UV cure adhesive in a military application. It is premixed with microspheres to ensure bondline thickness. However, there were problems in getting a homogeneous dispersion of microspheres in the mix – which could lead to poor fitment of the optical element and subsequent removal, cleaning and re-working. So Flynn Barrett, in charge of the assembly process, turned to our Product Specialist colleague David Peat, who demonstrated a bench-top Thinky ARE250 Mixer. 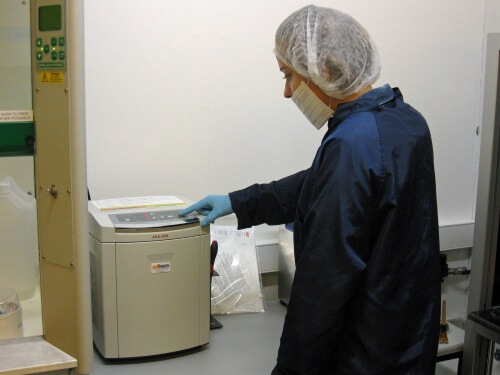 We had been working with a very difficult and long-winded manual mix and centrifuge vacuum process, which meant preparing a stock of premixed adhesive. Any batch with a non-optimal mix gave inconsistent results, a consequent high level of material wastage and lost labour time. The Thinky was really impressive; we are now able to mix smaller batches of adhesive using a very simple pre-programmed cycle.

Any process person at Gooch & Housego can now mix the adhesive by following a very simple documented process with the Thinky mixer and its intuitive controls.

As David Peat pointed out,

The Thinky mixer performs very well in this type of application – it is a non-contact “planetary” mixer which mixes, disperses and degasses in one process. The mixing result is consistent and reliable, so that the customer can mix as much material as they want, when they want it, with improved quality outcomes and significantly reduced re-work costs.

In addition, the Thinky ARE250 has been programmed to mix a two part sealant for a polariser prism assembly fitted inside aluminium housing. This sealant was previously mixed by hand, but again presented process challenges. Both parts of the sealant are the same colour, making it difficult to see if the mix was complete, resulting in occasional uneven or uncured parts. Mixing in the Thinky in a closed cup alleviates some of the health & safety issues around handling the material. The two part sealant is quite reactive when mixed, so the process is completed in a cooling adaptor in the Thinky, helping to preclude premature cure from heat build-up. It helps that mixing in the Thinky is usually much faster than by hand. A reliable, complete mix of the sealant provides both productivity and quality enhancements.