World renowned clocks have been made in Derby since the mid-1700’s, when clockmaker John Whithurst entertained his friends Benjamin Franklin and Erasmus Darwin (grandfather of Charles Darwin) at his house in Queen Street. So, when the Finesse Collection of hotels were planning the reception area of their new boutique hotel in the town it was natural that they seek out the present day flag carriers of the Whithurst brand. Smith of Derby worked closely with James Blick, the Hotelier, to derive a contemporary design in keeping with the modern refurbishment of their traditional building.

The spectacular design by Kevin Litchfield did however call for some very specialist work. Explains Kevin, “We needed to fit a glass map of the world into a fine stainless steel frame. The two-part adhesive we were using gave us problems so we called the team at INTERTRONICS to discuss a UV cure alternative. Paul Whitehead arrived two hours later and basically did the job there and then.”

Our solution was to use DYMAX 429, which allowed plenty of time to accurately position the one-off and highly expensive components before rapid curing initiated with an IUV 250 UV Curing Flood Lamp. Paul described the situation, “They were having problems getting the joint bubble free using a two-part epoxy – whereas the DYMAX 429 completely eliminated this problem and gave a virtually invisible bond in a matter of minutes.”

Reaction to the finished clock has been extremely positive with its unusual two-part electromechanical construction showing local time in one quadrant and global time in the other. The two elements are actually two separate clocks. One shows local time, indicative to the quarter of an hour. From 12am to 12pm (and vice versa) the hand travels through the quadrant, there are hour and quarter hour markings. As an example, if it is 11:59, the hand would be positioned at the bottom of the quadrant pointing downwards. At 12:00 the hand would travel back through the quadrant.

The second clock depicts world times through 24 zones – or the 24 countries mentioned on the clock itself. The reference point for clock is the UK, and then countries were selected that were an hour apart from the previous one. When looking at the clock the world map travels around and the time can be taken from the dial that surrounds the globe.

This was clearly a unique one-off situation with very expensive components where no mistake could be allowed for – but it was also a valuable learning experience and we understand that Smith of Derby already have another commission with similar requirements and already know the solution – DYMAX 429 UV Curing Glass Adhesive. 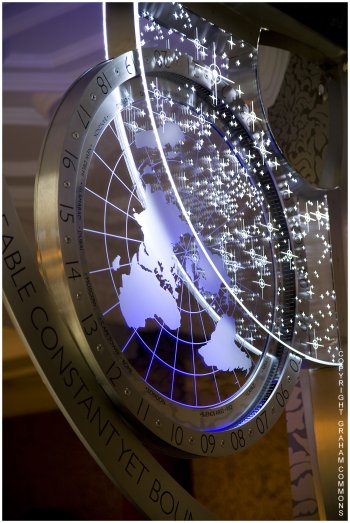